The standardization committees of 10 Gigabit Ethernet( 10GbE) have defined various interfaces for the 10GE technology and issued their own nomenclature for it. This nomenclature is based on the familiar Ethernet nomenclature 10GBase-xxx and characterizes the wavelength of the optical fiber, the coding and the wavelength division multiplexing(WDM) in the appendix(xxx).

10GbE interface is available for short wavelengths of 850 nm. These are marked with SR, which stands for Short Reach. In addition, there are interfaces with long wavelengths, for which the letter combination LR stands for Long Reach and LRM for Long Reach Multimode. These interfaces use the 2nd optical window at 1,310 nm for the transmission of optical signals, and the letter combination ER stands for Extended Reach and a wavelength of 1,550 nm. Furthermore, a distinction is made between 8B/10B coding (X) and block coding for LANs and WAN coding. For wavelength division multiplexing, the nomenclature distinguishes between serial (1) and the number for wavelength division multiplexing (n). 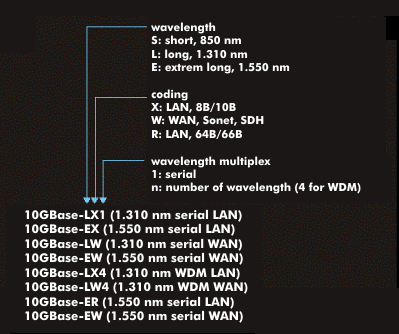 10GbE supports wide area networks with Sonet and SDH in addition to local area networks. The interface nomenclature recognizes the letter W for the wide-area network. In the W versions, the 10GbE data stream is packaged on the Physical Coding Sublayer( PCS) in a frame format of Sonet and Synchronous Digital Hierarchy (SDH). The transmission rate is 9.584640 Gbps, which is the same as the Optical Carrier, OC-192 or the Synchronous Transport Module, STM-64. This implementation is used when enterprises want to transmit their data from the 10 Gigabit Ethernet over SDH and Sonet from carriers or over wavelength division multiplexing (WDM) without mapping the Ethernet frames. For these WAN applications, there are 10GBase-LW, 10GBase- SW and 10GBase-EW interfaces depending on which optical window is used. These interfaces correspond in the physical layer with 10GBase-SR, 10GBase-LR, 10GBase-ER and 10GBase-ZR. 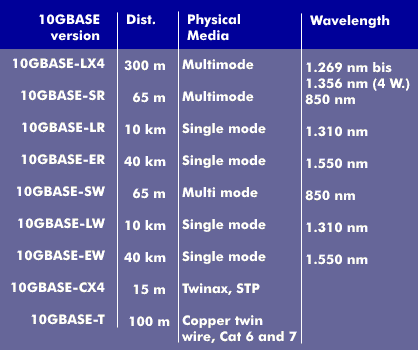 10GbE in the data center

In addition to the 10GbE interfaces that work with optical fibers, there are also some that are based on copper technologies: 10GBase-CX4 and 10GBase-T. 10GBase-CX4 is a technology that uses twinaxial cable and achieves the data rate of 10 Gbps over 4 lanes, with a range of 15 meters. Typical applications are cascaded switches and server farms. The other copper variant, 10GBase-T, uses STPcategory 6/7 cable and can be used for distances of up to 100 m.

10GbE in the backplane