As far as these applications are concerned, CWDM was first used for transmission on 8 channels, and later on 18 channels with wavelengths between 1,270 nm and 1,610 nm. The channel spacing is 20 nm, the channel width 13 nm. The remaining 7 nm are as safety distance to the next channel and as tolerance for the laser diodes. The transmission rate is 2.5 Gbit/s per channel, so maximum transmission rates of 10 Gbit/s, for example for 10GbE, are possible with a four-channel multiplexer. 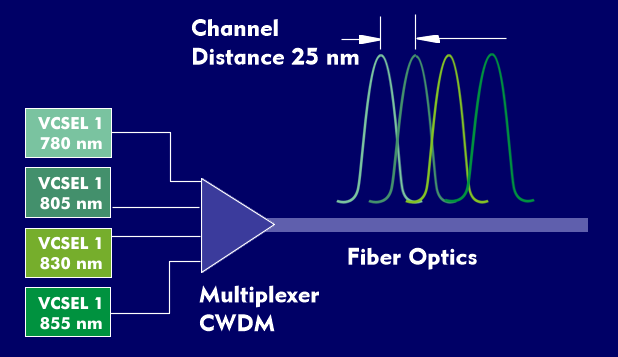 CWDM uses the wavelength ranges specified in the ITU grid for optical transmission systems and operates with narrowband VCSEL lasers. CWDM links can be implemented as point-to-point links using single mode fibers over distances up to 50 km. The signal-to- noise ratio between the individual channels is at least 25 dB. CWDM was specified in Recommendation ITU-TG.671 and later extended to 18 wavelengths by Recommendation ITU-T G.694.2. 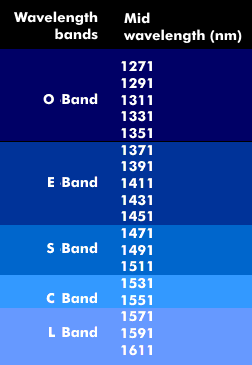 Wavelength raster of CWDM according to ITU recommendation G.694.2

In local area networks, CWDM operates in the optical windows at 850 nm or 1,310 nm. However, 802.3 's Higher Speed Study Group( HSSG) refers to the 1,310-nm technique as Wide Wavelength Division Multiplexing(WWDM). The channel spacing for 850-nm technology is 25 nm, and the four wavelengths are from 780 nm up. The transition from coarse wavelength division multiplexing (CWDM) to dense wavelength division multiplexing( DWDM) can be made using hybrid CWDM/DWDM.