2B1Q (2 Binary, 1 Quaternary) coding is a quaternary line coding in which two bits, corresponding to one dibit, are converted to a four- level (quaternary) signal, halving the step rate on the line. 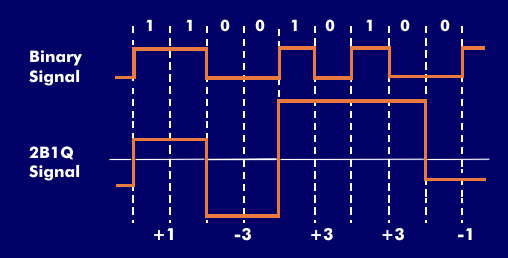 During conversion, a two-bit word is converted to a quaternary symbol, where the first bit is interpreted as a sign, and the second bit( LSB) is interpreted as amplitude. Thus, the binary combination 10 becomes the quaternary symbol +3, the 11 becomes +1, the 01 becomes -1 and the 00 becomes -3. The 2B1Q method is suitable for High BitrateDigital Subscriber Line( HDSL) and for the VDSL method (Very High Speed Digital Subscriber Line), but is also used for ISDN, namely for the transmission of the primary multiplex rate of 2.048 Mbps. A further reduction in the step rate can be achieved by splitting the data stream over two channels.