The SI system of units comprises the seven basic quantities length, mass, time, current, temperature, quantity of matter and luminous intensity. The basic units are based on reproducible natural constants and cannot be derived from other units. On the other hand, all other physical and electrical quantities can be derived from the base units, such as area, density, frequency, energy, power, voltage, resistance, field strength, capacitance, inductance, etc. All units are prefixed for practical use, forming a decimal multiple. 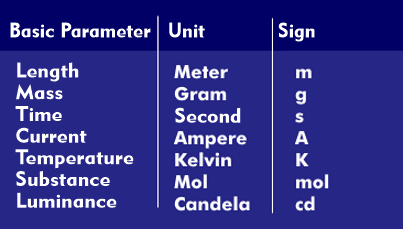 Basic quantities of the unit system