In antenna technology, reflectors are elements that change the directivity factor and influence the radiation of electromagnetic waves. In contrast to directors, reflectors are mounted behind the actual antenna and increase the return loss. This prevents interfering irradiation from the back of the antenna to the antenna element.

Reflectors can have different shapes: they can be rods, as in the Yagi antenna, or shielding plates in the form of a reflecting mirror, as in the parabolic antenna. In transmitting antennas, the reflectors reflect the electromagnetic radiation and thus increase the radiation in the transmitting direction. Reflectors are about 5% wider than the antenna element and are located behind the dipole at a distance of 0.20 of the wavelength. 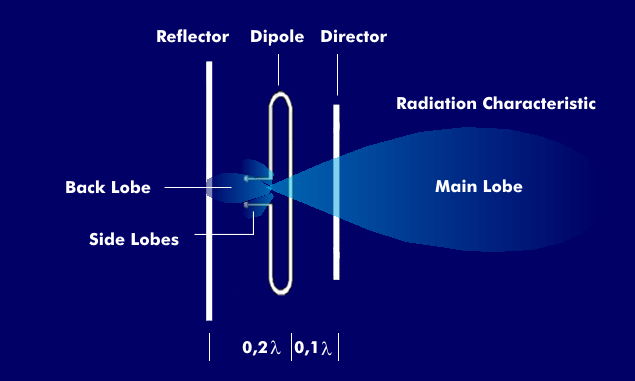 Dipole with reflector and director

Parabolic reflectors have the shape of a paraboloid cutout. This has the advantage that the parabolic reflector can be set up almost vertically, thus avoiding snow incidence, which leads to a change in reception conditions. At the focal point of the prabol mirror is the primary radiator or receiving antenna.

Reflectors are also used in acoustics for room sound, for example in lecture halls to improve sound propagation at unfavorable listening positions. They are baffles made of sound-reflecting materials that are attached to side walls and ceilings and reflect sound in the desired direction. Sound reflectors are made of plywood, metal or fiberboard and must be at least over one square meter in size for sound to be affected at all.