Divergence or beam divergence is when the diameter of an electromagnetic beam or a beam of light emitted from a point source increases with distance from the source. 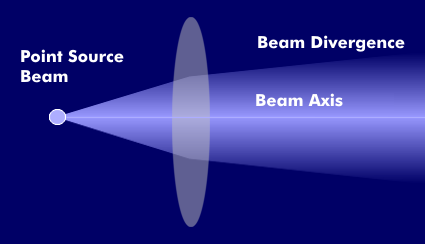 Divergent light is emitted from a light source in different directions and disperses at greater distances. In addition to divergent light, there is also convergent light and diffuse light.

Beam divergence is used to characterize the electromagnetic beam, for example in cases where the aperture of the radiation source is very large in relation to the wavelength. Normally, the beam divergence refers to a circular beam diameter, but it can also be used for elliptical ones, taking into account the diameter of the ellipse.