So-called software metrics, which quantify different properties of software products and processes, are used to measure software products. When measuring software, an object-oriented metric takes into account the grouping of data structures and the methods applicable to them to form an object, its relationships to other objects, and the general structural features of object-oriented programming( OOP).

The metric after Coupling Between Objects (CBO), in German as object-oriented software metric after CBO to interpret, is to be classified into the group of the measures, which are based on aggregation hierarchies and define thereby particularly a measure for the relations of classes among themselves. Other object-oriented software metrics include Weighted Methods for Class(WMC), Response for a Class( RFC), Depth of Inheritance Tree( DIT), Number of Children( NOC), and Lack of Cohesion in Methods ( LCOM).

CBO definition: the CBO is equal to the number of class(es) coupled to the class under consideration.

Here, coupling refers to the fact that a class uses instance variables - that is, variables of an instantiated class - and the methods of another class. However, classes developed through inheritance are not considered, nor is the number of methods used. 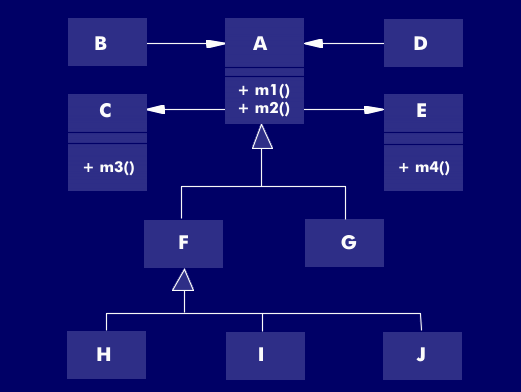 The shown class diagram defines the static parts of a system of classes with their associations and methods.

Application Mainly in connection with the testability and maintainability of software. This is based on the consideration that a class is to be understood and treated the more complex, the larger the number of its couplings with other classes is. The complexity then also entails a higher effort - an increased degree of difficulty - for changes.