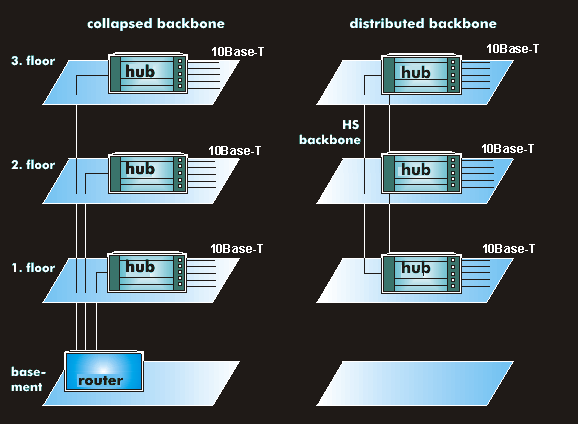 Comparison of collapsed and distributed backbone

The collapsed backbone has the following general advantages: It improves overall performance and facilitates the transition between local area networks( LAN) and wide area networks(WAN). There is only one central distribution room, one central distributor, and thus fewer active network components. In addition, a centralized backbone structure simplifies network management and maintenance; this increases security and reliability and safeguards investments.

Modular technology makes the company better equipped for new developments. For example, for ATM technology(e.g., for interconnecting hubs or routers). The difference between a collapsed backbone and a distributed backbone with distributed bridges or time-division multiplexing can be summed up simply: Distributed bridges or TDMs break the network into individual, separate LAN segments and mediate between them; a collapsed backbone ultimately results in a relatively unified overall network.