ARPANET is the oldest TCP/ IP-baseddata packet network that initially used leased lines. It was built and implemented in 1969 by Bolt, Beranek and Newman (BBN) under the auspices of ARPA, a research institution of the U.S. Department of Defense.

Because of its structure, the Arpanet could be called the first backbone network, but only with a transmission speed of 56 kbit/s. 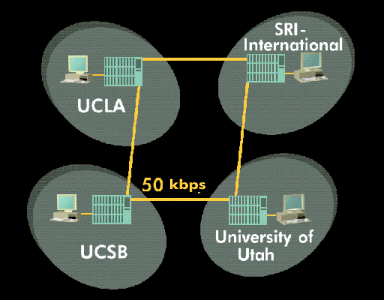 In the basic structure, four nodes - called Interface Message Processor( IMP) in Arpanet - of the Universities of Utah, Stanford Research Institute, Santa Barbara and Los Angeles were interconnected via leased lines. In 1975, the Defense Communications Agency( DCA) took over management of the Arpanet, which was split into a public network and a military network, the MILNET, in 1983. The Arpanet grew steadily and, since deregulation, is commonly known as the Internet.