Tetra, the ETSI standard for digitaltrunked radio, has high transmission quality and good frequency economy. The transmission ranges are in different frequency bands between and 470 MHz, and between 870 MHz and 920 MHz. In Europe, Tetra operates in the former frequency range between 380 MHz and 400 MHz. This frequency range is also reserved for emergency services and for traditional public radio services, private mobile radio( PMR), and for private access services (PAMR).

In Europe, Tetra occupies the frequency ranges between 380 MHz and 400 MHz, 410 MHz and 430 MHz, 450 MHz and 470 MHz, and between 870 MHz and 920 MHz. It operates according to the TDMA method in time division multiplex with four independent communications channels per carrier frequency. In this multiple access method, several subscribers share a transmission frequency by means of time slots that are made available to each subscriber in turn.

The distance between the individual carriers is 25 kHz, and the distance between the transmit and receive frequencies, i.e. between uplink and downlink, is 10 MHz. At a transmission rate of 9 kbit/s per channel, a total of 36 kbit/s is transmitted per carrier frequency. In addition to the data to be transmitted, additional control signals as well as codes for data security of the radio link are transmitted. For duplex voice transmission, the voice is compressed by means of voice compression so that continuous two-way communication is possible via two staggered time slots. 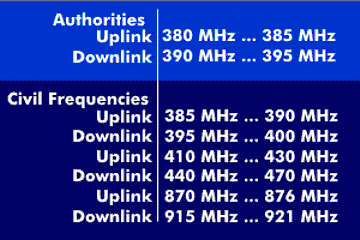