The human eye reacts differently to colors and intensities. Both parameters, the hue as well as the brightness, trigger different sensations, which is due to the fact that the human eye has different light-sensitive receptors: The rods and the L, M and S cones for long, medium and short wavelength light. These three receptors are unequally distributed on the retina.

Rods, of which an eye has about 100 to 120 million, have their maximum sensitivity at 500 nm, which is green. Rods are much more sensitive than cones and enable vision in darkness, but only in shades of gray. 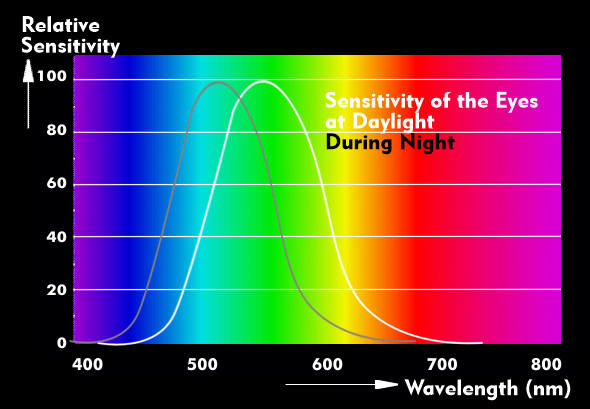 The brightness perception of the human eye is not linear, but logarithmic. The same applies to color perception, which takes place via the cones, which are located almost exclusively in the center of the retina, the macula or fovea. The approximately 8 million cones can be divided into three different cone types for different colors, which have their highest sensitivities at 420 nm, 530 nm and 560 nm. The cones are excited at a light intensity of about 10 candela( cd) per square meter and enable vision during the day. For the reasons mentioned above, the human eye perceives the colorgreen to be about ten times brighter than red or blue.

Since sensitivity impressions differ individually, a standardized eye sensitivity curve has been formed that is adapted to the average sensation and serves as a reference for visual models.