Triggering means the defined temporal or level triggering of a function. Triggering is initiated by a trigger signal.

The trigger signal can represent a certain state, for example the rising or falling edge of a pulse, a logical link, if two signals fulfill a logical AND function, or a certain level, which triggers a trigger signal if the level is exceeded or not reached. 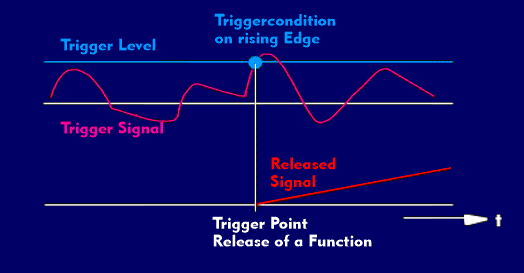 Trigger signals are used for the defined triggering of an oscillation, a burst or an oscillation train. The function of triggering is used in electronic circuits, in generators and measuring devices, in mixing and cutting technology, in networks, computers and buses.