Push-pull amplifiers, also known as push-pull amplifiers or balanced amplifiers, compensate for these disadvantages. They operate with two complementary transistors that have completely identical DC characteristics and identical but opposite operating characteristics: an NPN and a PNP transistor. The two transistors are each driven with one half-wave of the input signal, the NPN transistor with the positive half-wave, the PNP transistor with the negative half-wave. Both transistors are connected to each other in the emitter circuit, where the two amplified output signals are matched to the loudspeakers with low impedance. This amplifier concept corresponds to the amplifier class "B". 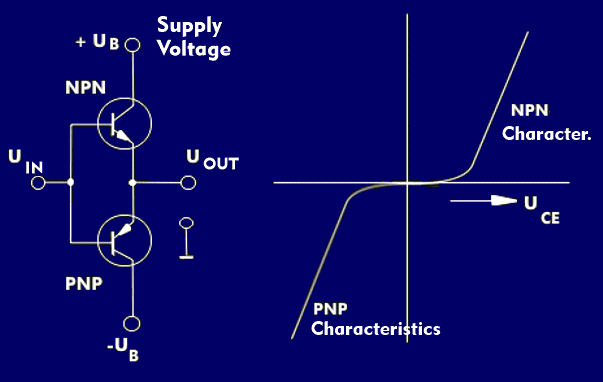 Simplified push-pull circuit with the characteristics of the two transistors, amplifier class B

The disadvantage of this amplifier concept is that signal levels which are within the base-emitter threshold voltage - for silicon transistors this voltage is 0.7 V - are not amplified or are amplified in a distorted manner, but only those signal levels which are above the threshold voltage are amplified. This disadvantage is eliminated by additional silicon diodes in the base circuit. This shifts the operating points of the transistor circuits and turns the B-class power amplifier into a low-distortion AB amplifier.