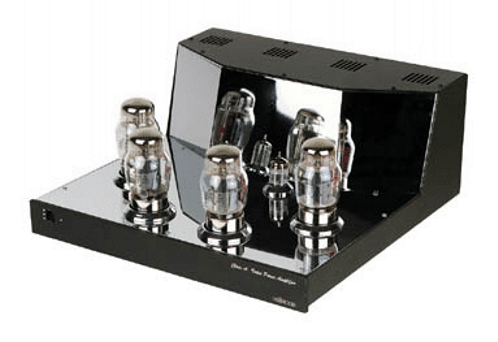 Audio power amplifiers are found in all radio, television and audio equipment. They are either tube or transistor amplifiers. Their task is to amplify the audio signal received from the preamplifier in terms of power and to adapt it to the low-impedance loudspeakers.

Important characteristics of audio power amplifiers are their power, which, depending on the type of signal, can be divided into nominal power, peak power, sinusoidal power and musical power. In addition, there is the distortion factor and the efficiency, which determines the power transferred to the loudspeaker. Since the efficiency of loudspeakers is very low and in the lower percentage range, an optimal voltage match to the loudspeaker impedance is particularly important.

A class: In power amplifiers with A operation, the operating point is in the middle of the linear part of the characteristic curves. It is a single-ended power amplifier with a relatively high linearity, but a poor efficiency.

B class: Amplifiers with B operation are push-pull amplifiers, which have a much higher efficiency than those with A operation, but also strong non-linearities.

AB class: Amplifiers with AB operation are driven single-ended, like the A amplifier, but operate with balanced voltage supply. The transistors arranged in complementary circuitrydirectly drive the loudspeaker in the emitter circuits. The AB circuit is the most commonly used power amplifier concept.

C-class: These amplifier circuits are used in RF technology, mainly as RF power amplifiers in transmitters. Such C amplifiers have high nonlinearities and high efficiency and are used for driving antennas.