Ping flooding is a DoS attack. It is a targeted attack with which the system performance of servers is severely affected or the server can crash. Ping flooding works like the ping-pong method.

In ping flooding, servers are bombarded with countless ICMP echo requests. Due to the high number of pings, the server 's response time decreases and the network connection is heavily loaded.

Ping attacks are particularly successful when the attacker has a high or higher bandwidth available than the attacked party. In the case of ICMP data packets, the data packets with the ICMP echo responses put a strain on the bandwidth, which can cause the system to crash. 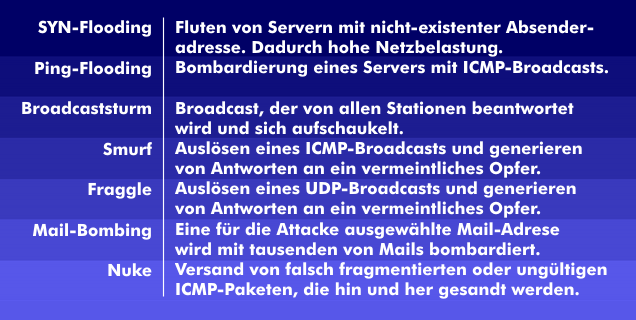 Ping flooding can be investigated using the ping strandess method. This method involves detecting unusual structures of ICMP packets sent to specific network nodes. So is a high number of returning error messages.

In Ping Strangeness, the user sends a request as an echo request packet to a specific IP address. If the destination address is active, it sends a reply in an ICMP packet to the requesting station. The timestamp of the echo reply can be used to determine the Round Trip Delay( RTD). If there are unusual patterns in the reply data packets, these should be examined more closely, as they could be DoS attacks. A variant of ping flooding is the smurf attack, which targets the broadcast address of a network.