Multiprotocol over ATM (MPoA) is a draft prepared by the ATM Forum for the standardization of protocols of the different layers to be operated over ATM. The aim of Multiprotocol over ATM (MPoA) is to replace router networks with comparable but much more powerful functionality within an ATM network. MPoA therefore simulates a virtual router rather than a local area network( LAN).

An MPoA network consists of two logical components, the MPoA clients and the MPoA servers. MPoA clients are either MPoA Edge Devices (MPED), which are bridges with interfaces to classic LANs, or MPoA Hosts (MPH), which are ATM end devices. The clients form the sources and sinks of an ATM network and are responsible for forwarding data packets on Layer 3 and using shortcuts. The MPoA client has implemented the client functionality with one or more MPoA protocols. It also acts as a functional group, an Edge Device Functional Group (EDFG) or a Host Behavior Functional Group( HBFG). 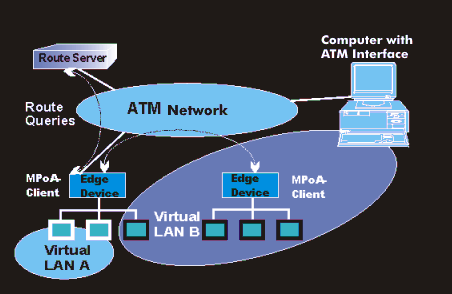 The MPoA servers are routers that have implemented LEC software in addition to their routingsoftware and represent Internetwork Coordination Functional Group( ICFG) and Route Server Functional Group( RSFG) functionality.