In order to be able to realistically reproduce binaural sound recordings, i.e. two-voice sound recordings, the founder of the Beyerdynamik company, Eugen Beyer, developed an artificial head in the 1930s that corresponds to the human head. More recent head replicas take into account the auricles and auditory canals and have two microphones in place of the eardrums.

The time-of-flight differences, frequency differences, and level differences between the two microphones thus replicate human hearing perception. The influence of these parameters is called the head related transfer function ( HRTF).

The artificial head is used for testing purposes. In the 1960s, there were also stereo radio broadcasts in artificial head stereophony. In these sound recordings, sounds, speakers, or individual musical instruments could be related in direction and distance. Even if they originated behind or above the listener. To fully enjoy the stereo effect and surround sound, these sound recordings should only be listened to with headphones. 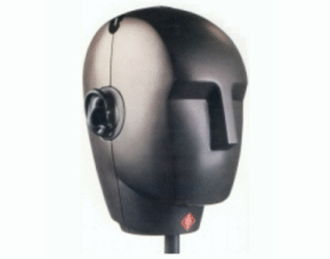 Mercedes Benz uses the artificial head recording technique for testing purposes in the development of its automotive audio systems.