Germanium is a chemical element. It belongs to the main group IV in the periodic table and has the atomic number 32. Germanium is a semiconductor with semi-metallic properties, whose conductivity changes strongly with temperature or doping. Like other semiconductors, it is used in monocrystalline form in microelectronics components.

Germanium atoms have four electrons in the valence band, which are connected to those of the neighboring atoms. If an electron is torn out of the electron bond by energy input, it can be used for charge transport and leaves a hole at its former position. 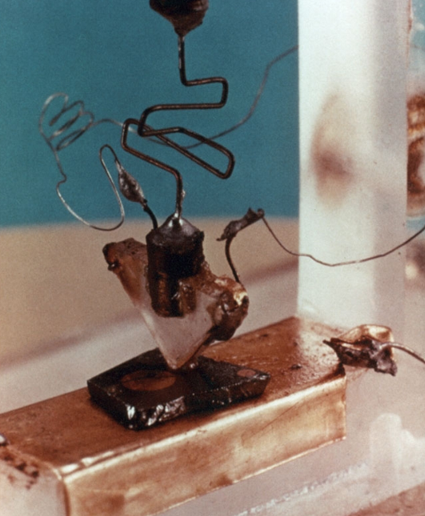 Experimental setup of the first transistor by Shockley, Bardeen, and Brattain, photo: IEEE.org.

Like silicon, germanium is used in semiconductor devices, but it is much more temperature-dependent than silicon.