A Complex Programmable Logic Device (CPLD) is a pre-assembled, freely configurable logic device. These devices, which are a further development of Programmable Array Logic( PAL) and Programmable Logic Devices( PLD), are characterized by high processing speeds, simple design, predictable timing and easy programming. They consist of PAL-like functional units that are programmed via a switching matrix of their connections.

Complex Programmable Logic Devices functional units include AND gates and OR gates, caches, registers, and input/output systems that can be linked together. Here, different logic units are combined into larger macro function blocks in the form of a matrix. The complete CPLD device can contain up to 500 logics. 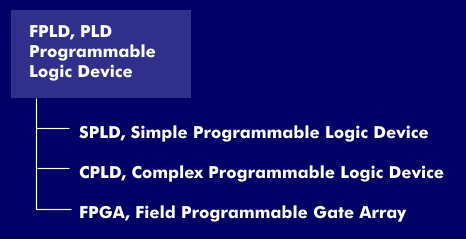