As can be seen from the name metal foil resistor, it is an electrical resistor whose resistance value is formed by a metal foil. Most often, a NiCr( nickel-chromium) or CuNiMn( copper-nickel-manganese) metal foil is used, which is produced in an etching process and folded in on itself.

The self-folded resistor body can be dipped in epoxy for environmental protection. Metal foil resistors are available with axial and vertical lead wires. Compared to metal film and carbon resistors, metal film resistors are characterized by low noise and are also very low in inductance. The electrons can move more freely in the metal foil resistor and thus generate less current noise. 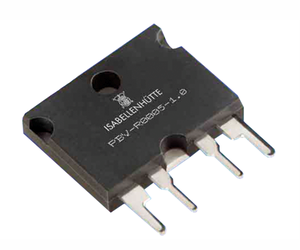 Metal foil resistors are available with resistance values ranging from a few ohms to about 500 kOhms, and in precision versions they have extremely low resistance tolerances, ranging from 0.005 to 0.02, and temperature coefficients of 0.2 ppm/°C.