Like WiMAX, Broadband Fixed Wireless Access (BFWA) is a broadband radio access technology that operates in the 5 GHz frequency range and can be used to bridge distances of up to 20 km.

Network operators can use BFWA to operate license-free, permanently installed radio systems for broadband access. A general allocation is issued by the Federal Network Agency for operation, which applies to "commercially public, broadband, fixed distribution systems." The Federal Network Agency does not prescribe any specific radio technology for providers, but merely specifies the maximum values for transmission power for point-to-point and also as point-to-multipoint connections. 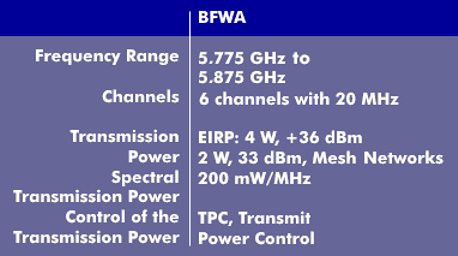 The frequency range between 5.755 GHz and 5.875 GHz was approved for BFWA by the German Federal Network Agency(BNetzA) in August 2007. It lies 30 MHz above the subband of 802.11a. This 120 MHz band accommodates 6 channels with a bandwidth of 20 MHz. The limit for transmit power, EIRP, is max. 4 W, corresponding to 36 dBm, from which the limit for spectral transmit power is 200 mW/MHz. In addition, operation requires a method for regulating the transmit power, Transmit Power Control( TPC).

Unlike WiMAX, BFWA has shorter ranges and the frequency range is not exclusively allocated to users.