Radio technologies are transmission techniques based on electromagnetic waves. The carrier waves are modulated with the information content and detach from the antenna at a certain wavelength.

The bridgeable distance of the carrier frequency depends on the wave propagation, the transmission power and the absorbing buildings or terrestrial topography. Radio technologies reach their limits where it is necessary to communicate with mobile terminals moving at high speed. This problem is due to the Doppler effect and affects mobile communications, since frequency shifts in broadcast transmission can be compensated for by readjustment mechanisms. 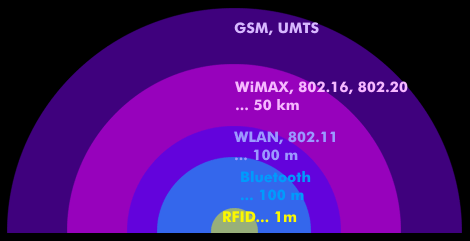 Ranges of the various radio technologies

In the short-range area, it is a matter of short transmission distances in the centimeter range, as in near- field communication( NFC) and RFID, but also wireless communication in the in-house and outdoor area. These include wireless telephony, ultra-wideband( UWB) WPANs, WLANs, Bluetooth, TransferJet, ZigBee, wireless home networks, and wireless sensor- actuator networks. 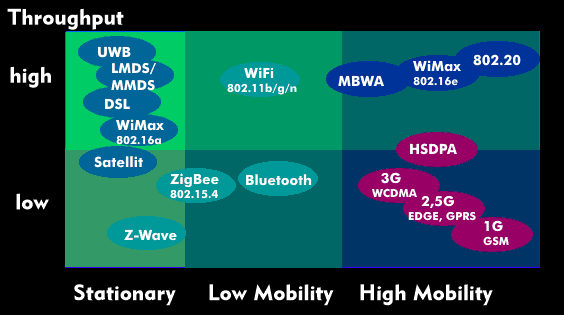 The metro area and the access area are familiar with wireless local loop, fixed wireless access( FWA), WLL networks, broadband fixed wireless access( BFWA), WiMAX and directional radio. For mobile communications, the classic mobile communications networks should also be mentioned. This area also includesradio, television and special radio services for shipping, such as marine radio, aeronautical radio, air traffic control and many others. And in the case of global satellite-based networks, there are a large number of LEO satellites, MEO satellites, HEO satellites and GEO satellites for direct voice communications, for relay functions, the GPS system or for broadcast.