Bitcoin is a cryptocurrency that can be converted into real currencies, such as euros or dollars. The virtual Bitcoin currency has the currency unit "BTC", which is labeled with the corresponding numerical payment amount; e.g. 50 BTC. Smaller Bitcoin units are denoted as milli-Bitcoin (mBTC).

Bitcoin can be used as a cryptocurrency or cybermoney for e-cash in power shopping or e-commerce. It supports transactions between business partners on the Internet who have a Bitcoin client. Ownership of the virtual currency is proven through cryptographic keys. 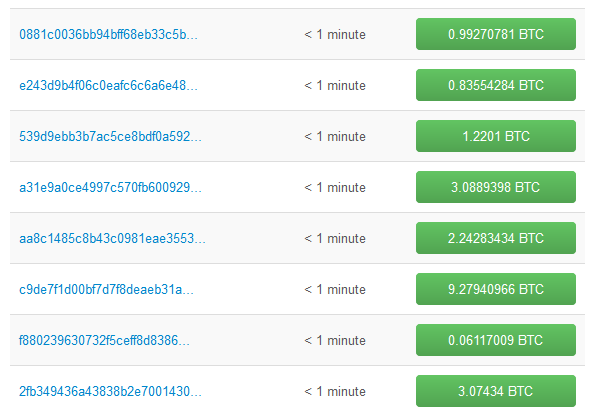 Blockchain for Bitcoin trading, with algorithms and amount, screenshot: https://blockchain.info/

Bitcoin transactions are executed on a dedicated Bitcoin network, where all participants have equal rights and whose computers handle BTC payment transactions. All transactions in a given period are aggregated in a blockchain and assigned a hash value.

To prevent abuse, there are some strict rules for generating new Bitcoins and limiting the number generated. Because the algorithms for generating new Bitcoins is extremely complicated, new Bitcoins can only be generated with a very high computing effort. In this context, one also speaks of mining or Bitcoin mining, i.e. prospecting for Bitcoins, and thus means the extremely complex calculation of new Bitcoins. Bitcoin miners are therefore also referred to as miners. The more Bitcoins are mined, the more elaborate further mining becomes. The forgery protection of Bitcoins is ensured by digital signatures.

The Internet currency Bitcoin is freely traded. It is therefore offered for sale and purchase. The trading place is the Japan-based Bitcoin exchange Mt.Gox (The Gathering Online Exchange). The exchange rates to the hard currencies are also set there.

Due to trading and the speculation involved, Bitcoin rises and falls like other real currencies. The total value of Bitcoins is determined according to a mathematical model and can reach the value of 21 million BTC in several years. This value can be equivalent to a euro value between 210,000,000 and 500,000,000 depending on the exchange rate.