An answering machine (AB) was a telecommunications terminal that automatically received incoming calls, stored them and answered them with a voice message. The answering machine was functionally comparable to a voice mailbox, but it was not a value-added service provided by a network operator, but a private terminal device of the end user.

Answering machines answered calls, stored the information communicated by the caller on magnetic tapes and later on memory chips, and informed callers that the call had not been answered by means of a recorded announcement. The end user could listen to the recorded messages at any time and call back the caller using the number provided by the caller or the activated caller ID. 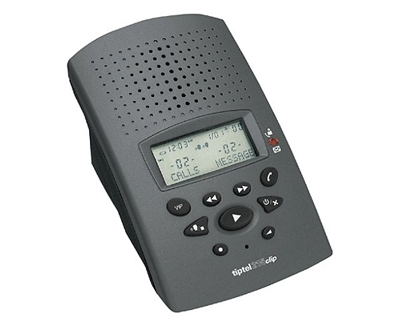 The incoming messages were the incoming messages( ICM), the recorded messages the outgoing messages (OGM). The stored messages were provided with date and time to give the called party a temporal reference. With the outgoing message, the called party could tell the caller why he could not accept the call, that he could be reached at another telephone number, or that he would call back. It was also possible to query the answering machine remotely from other telephones by dialing the answering machine and entering a personal identification number( PIN).

In addition to the above-mentioned functionalities, there were various others, such as setting the waiting time before answering the call, remote activation of the answering machine and some more. Answering machines were replaced by provider voice mailboxes in the 1990s.