Furthermore, there are also such synthesis methods that store sounds from instruments and combine them into new sound images. The former include FM synthesis, Fourier synthesis and waveguidesynthesis. Wavetable synthesis belongs to the second-mentioned.

Sound images consist of a multitude of tones and their harmonics that are created synthetically by generating, mixing, and filtering frequencies. While several of the aforementioned synthesis techniques rely on the mixing of synthetically generated frequencies, subtractive synthesis works by filtering out frequencies, using bandpass, highpass, and lowpass filters with relatively high slopes to filter out specific frequencies from the frequency mixture to create the sound image. 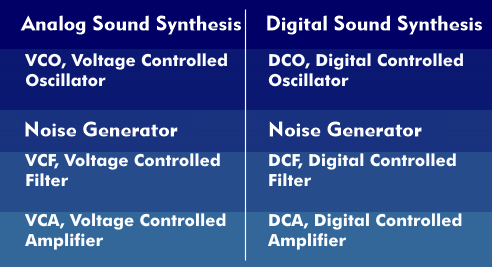 In addition to the sound synthesis methods mentioned, there is the ADSR model, which stands for Attack, Decay, Sustain and Release and in which the sound frequencies are broken down into time and amplitude-dependent factors, and the wavetable method in which sounds from different instruments are stored in memory in order to combine them later for sound synthesis.