A wireless mesh network (WMN) is a radio network in which the access points and base stations are interconnected by radio technology. Modern radio systems such as UMTS, WLANs, Ultra Wideband( UWB) and WiMAX have a high data throughput, but only over comparatively small distances. Only mesh networks, as defined in 802.11s, offer the possibility of extending radio networks over large areas. In this network concept, a radio meshed structure is created between the base stations, the mesh access points ( MAP).

Since the data rate between the MAP points increases disproportionately as the distance becomes shorter, it makes conceptual sense to work with a higher MAP density. For example, the data rate quadruples when the distance between MAPs is halved. It also makes connections much more reliable without an increase in transmit power. 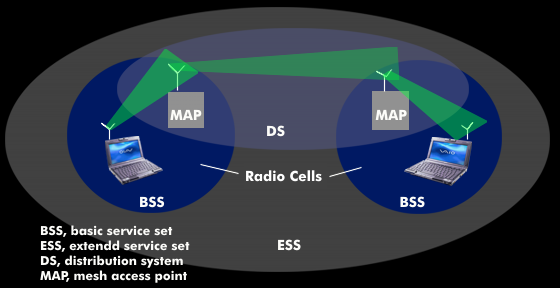 Configuring a mesh network for WLANs according to 802.11s

The 802.11s working group, Wireless Mesh Network (WMN), specifies an arbitrarily expandable, area-wide mesh structure of wireless LANs. Wireless communication between WLANs ensures the flexibility of data networks in offices, warehouses or production facilities, as well as an increase in radio coverage and redundancy in the event of infrastructure failure.

In terms of structure, a mesh network is a meshed radio network formed exclusively by the mesh access points. In addition to the mesh APs (MAP), 802.11s defines mesh points( MP), which forward data but do not offer stations the opportunity to associate. The routing protocol used in wireless mesh networks is dynamic source routing( DSR), which uses route discovery to find the optimal route through the mesh network in response to a connection request.

In addition to the aforementioned techniques, the IQRF radio network is another interesting approach for connecting components in the Internet of Things( IoT) in a wireless mesh configuration.