VR glasses are goggles for displaying virtual reality (VR), which has also found its way into home theaters or mini cinemas. While the possible uses of VR technology were limited to industrial applications for a long time due to the high computing requirements, virtual reality is also making its way into entertainment and gaming technology thanks to the high 4K resolution ofsmartphones and tablets.

Realizingvirtual reality on smartphones and tablets with VR goggles or a VR headset is a low-cost approach, due in no small part to the high computing power of these devices. In the case of Oculus Rift, for example, this is used to display two images for the left and right eye distorted in a pillow shape next to each other on a smartphone. Via the lens systems of the VR glasses, the images are displayed rectified and show virtual realities; for example, when walking through premises, through hotels, ships or resorts. 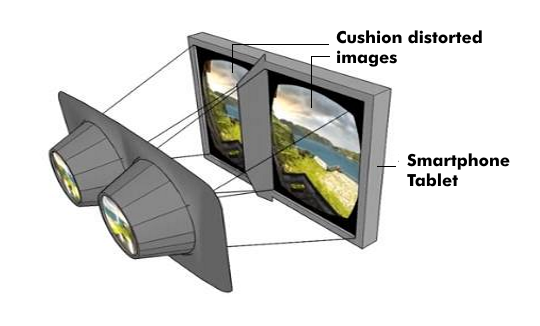 To ensure that the image buildup in VR projection is not jerky, the tracking, which is executed simultaneously with the rendering and display of the following image, must not exceed 50 ms. The computing power of the smartphone or tablet plays a major role in this.