In terms of approach, desktop virtualization, Virtual Desktop Infrastructure (VDI), separates the physical personal computer and its operation. The personal computer that is virtualized in the data center is located in a different place than the user who operates it.

In a way, it is similar to remote access to a single workstation using Remote Access Service( RAS). The difference with desktop virtualization is that desktop virtualization has a centralized approach, where the desktop is located in the data center. In this constellation, the desktop is a linked service in the data center that users can access regardless of their location and that automatically integrates with IT service management. 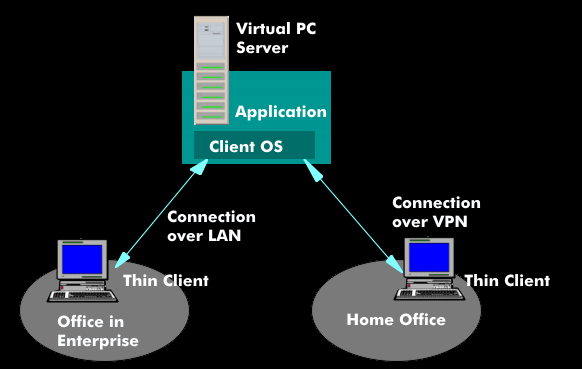 Desktop virtualization. Users can access their working environment from their office and home office.

As a cloud service, such a service is also known as Desktop as a Service( DaaS). The configuration can be seen as a terminal server configuration, where the applications run on the server and the terminal user interface is provided by the clients. All operating functions from the keyboard or computer mouse are transferred to the server, processed there and transferred to the client on site as a screen display.

The further development of desktop virtualization can be seen in the fact that the complete client operating system with all local applications runs in a virtual machine( VM) on the server. Every employee can access such a constellation from his or her workstation or home office. The workstation itself can be a personal computer, a thin client or a terminal.