Video signals find their origin in analog television. The portion of the television signal that contains the image information is called video. Starting from this classic analog video, video technology has adopted other formats with digitization.

The classic video technology works with a screen display that is horizontal from left to right and vertical from top to bottom. The horizontal scanning is called line, the vertical scanning image. For technical reasons, and taking advantage of the inertia of the eye, classical video distinguishes between two images, called fields, which together form a picture or frame. The two fields differ in that in one field the even lines (2, 4, 6, ..) are displayed and in the following field the odd lines (1, 3, 5, ..). If both fields are superimposed, the line structure of a full image is complete. This technique is called interlaced video, also known as interlacing.

The classical video has a historical development behind it, which cannot be replaced easily. These include blanking gaps in the horizontal and vertical. These took into account the technical possibilities of the time, because the electron beam is darkened at the end of a line and must be placed at the beginning of the next line. The same applies to the return of the electron beam from bottom to top, which takes place during the vertical blanking interval.

Other relics from more than 50 years ago are the modulation methods for the picture information. It should be noted that all video developments always had to take into account compatibility between existing and future technology. This was especially true for the introduction of color television. In addition to the black-and-white signal, which could not be changed in its information content, a color signal had to be transmitted without black-and-white television being affected by the color signal. For this reason, the video format exists with two color difference signals reduced in bandwidth, which take into account the lower color resolution of the human eye and are reflected in the YUV color model. Except for the YUV signal, the explanations apply to all PAL, NTSC and SECAM color television standards.

Brightness and color components in the video signal

The video signal consists of the black and white signal, which is called the luminance signal, the blanking pulses and the sync pulses. This signal is called BAS signal, where "B" stands for picture, "A" for blanking and "S" for synchronization. The corresponding color signal FBAS with "F" for color. This signal is also called composite video. 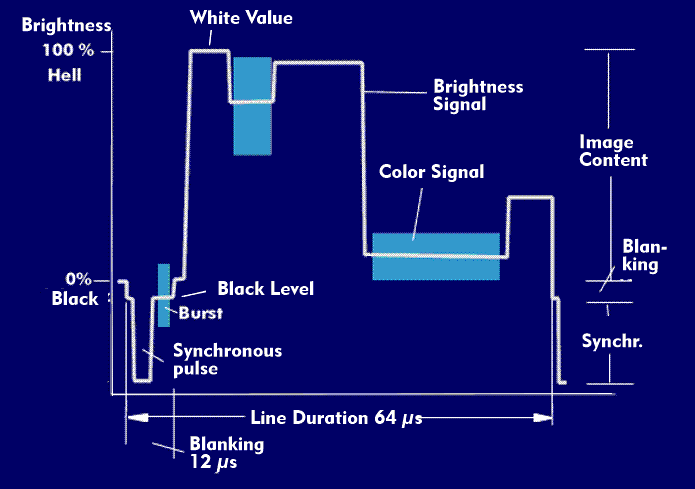 In addition to composite video, a video signal can also consist of the three color components red (R), green (G) and blue (B). This is then referred to as component video. It is also possible to record the brightness signal (Y) and the complete color signal ( chrominance signal, C) separately. This is called separated video, S-video, or Y/C video.