In real-time video transmission, the video signals, like the voice signals, are digitized, compressed and then transmitted between two or more conference rooms simultaneously. There are specially equipped rooms for video conferencing. Usually, such a room has a conference table for the participants, video cameras for recording and displays on which the other conference group is shown. In these systems, transmission takes place via high-speed connections and, in the case of intercontinental connections, via satellites.

In addition to videoconferencing with point-to-point connection between two participants, there is also telepresence via personal computers and multipoint videoconferencing between several participants. This concept works with a Multipoint Control Unit( MCU), which converts the video signals in a relatively complex way.

Video conferencing can increase employee productivity and improve communication and interaction among colleagues, customers, suppliers, and business partners. Project times can be shortened, time on the job increased, and business travel costs reduced. 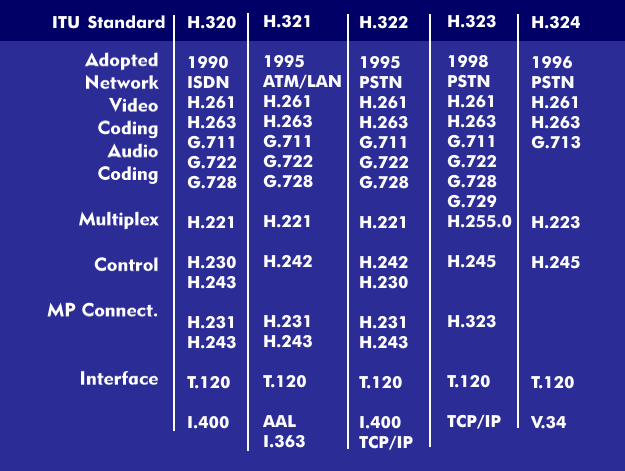 Videoconferencing standards: H.320: H.320 is about the transmission of videoconferences over ISDN.

H.322:H.322 describes the encodings and transmission mechanisms for video conferencing over ATM and Ethernet with quality of service( QoS).

H.323: H.323 describes the functions for transmitting audio, video, and data streams over LANs without quality of service (QoS)

H.324: H.324 defines the standards for the transmission of audio, video and data streams over the normal low-bandwidthtelephone network (POTS)

G.711:Digitization of audio data in telephone quality of 3.1 kHz with a data rate of 56 kbit/s

In addition to the ITU recommendations, there is also Video-as-a-Service( VaaS), a cloud service for video conferencing through which companies support collaboration with employees and customers. Furthermore, with Computer Supported Cooperative Work( CSCW), a PC-based method for cooperative work exists, although it has certain limitations. The further development of video conferencing leads to telepresence with virtually present participants.