The residual sideband modulation is a modulation method in which one sideband is modulated with the full bandwidth, while the other sideband is transmitted with a greatly reduced bandwidth.

The ATSC has specified vestigial sideband(VSB) for digital terrestrial broadcasting ( DVB-T), namely version 8-VSB. This method uses eight phases, which are encoded with three bits and finally reduced to two bits. The resulting payloaddata rate is 19.28 Mbit/s for a 6 MHz frequency band. 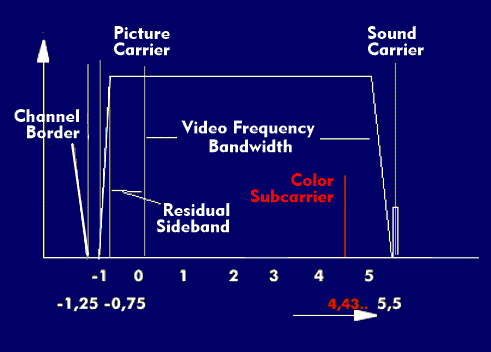 Frequency bands and carrier frequencies of the PAL television signal

For transmission over cable distribution networks and for data-only applications, the Advanced Television Systems Committee ( ATSC) standard provides for 16-VSB.