The VME bus (Versa Module Europe) is a system bus developed in the 1980s by Motorola, Mostek, Philips, Thomson and Signetics and standardized by the International Electrotechnical Commission( IEC) under IEC 60281. The VME bus was developed for the Motorola CPU 68000 and is used in scientific and industrial applications in industrial computers.

As connector system the VME bus has the european connector with 2 x 96 contacts over which a 32 bit address bus and a 32 bit wide data bus are led. The specifications for the boards know the eurocard format (3U) and the eurocard double format(6U).

The VME bus, developed for real-time applications, supports multiprocessing and multi- user systems, has arbitration with different algorithms for access authorization, comprehensive interrupt handling, can include 20 slots and much more. The max. data rate is 160 MB/s, the addressable memory area is 4 terabytes( TB). 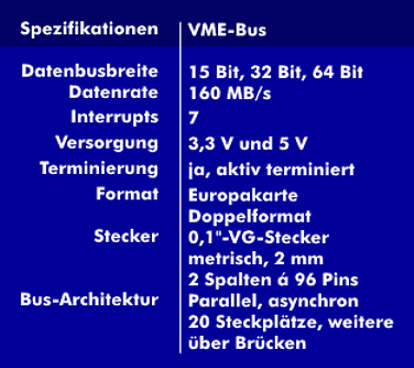 Specifications of the VME bus

Conceptually, the VME bus operates in master- slave mode with a central controller controlling access to the bus, which is supported by many peripheral components. These include controllers and switches, extenders, processors and interface adapters.

The VME bus has its domain in industrial use and its advantages over the PCI bus in single accesses to the bus, such as reading analog and binary inputs/outputs.