In the individual cultures, characters have been created over centuries to represent texts. Writing fulfills the prerequisite for documenting events.

The representation of writing was mechanized by the printing of prefabricated characters which, when strung together, produce words and texts. From this history, the mechanical and optical typesetting technology, the phototypesetting, developed, which is reflected today in electronic form in text, typesetting and make-up programs in personalcomputers( PC).

Due to the enormous computing power of modern computers, the many possibilities of type and typesetting technology can be implemented. These include the font style, the font type, the font size, the font run, and the degree of boldness. As a unit for the font size, the unit "point" used in the classical typesetting technique, from the Didot point, was adopted. One point(dp) is equal to 0.38 mm. The type width is given in pica. One pica is equal to 1/6 inch or 12 point. 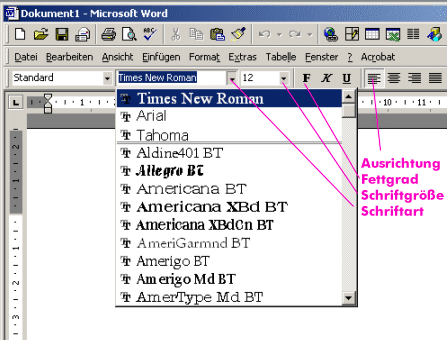 Some font and typesetting functions in Word

With regard to typesetting, other design features include the type area, typesetting style such as flutter or justification, and weft through. In addition, there are other style elements for the font and the typesetting technique.