The coaxial cable used for Thinwire Ethernet is also called RG 58, but it does not correspond to the classic RG-58 cable in all characteristic values. The external distinction can be seen in the color, the RG-58 cable is black, the Thinwire Ethernet cable is gray and has a braided shield and a foil shield in contrast to the RG 58.

Thinwire Ethernet has length and connection restrictions compared to the classic Ethernet, which is due to the attenuation of about 4.6 dB per 100 meters (Yellow Cable 1.7 dB/100m), and uses the inexpensive BNC connection technology to connect the adapter cards to the cable segment. 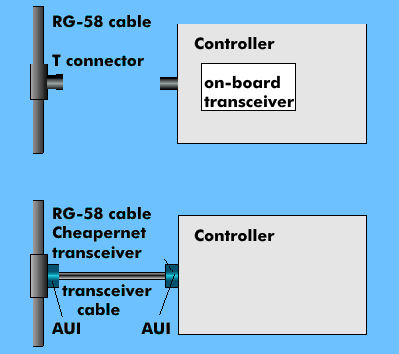 Transceiver connection of 10Base-2

The Thinwire Ethernet cable is distinguished from the bulkier Yellow Cable by its flexibility, which is due to its small diameter and simpler shielding technology.