Thermocouples(TE) are sensors that generate voltage when temperature changes. They are based on the Seebeck effect and the Peltier effect, which state that a contact voltage is generated at the contact point between two different metals in contact. This contact voltage is caused by the charge displacement between the two metals, it is directly dependent on the temperature at the contact point, and is called thermoelectric voltage. The Seebeck effect and the Peltier effect occur together, but can be used separately.

The charge displacement is due to the electromotive force( EMF) in metallic conductors. The emf is material-dependent and arises as soon as there is a temperature gradient in a metallic conductor. Thus, a temperature-dependent potential difference arises in two different materials. Taking tin (+3.0) and nickel (-1.9) as an example, a thermoelectric emf of '4.9*10^-6` V/K would result, and thus a thermoelectric emf of 1.44 mV at room temperature of 20 °C. 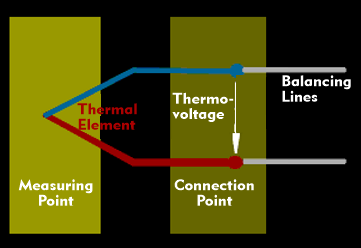 Basic construction of a thermocouple 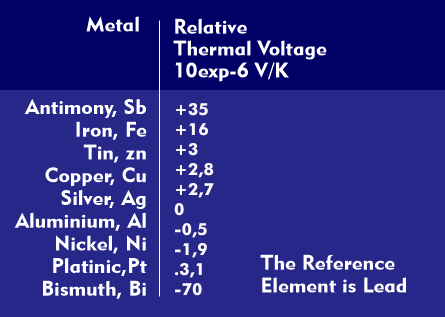