TETRA stands for Terrestrial Trunked Radio; the previous designation was Trans European Trunked Radio. TETRA is the ETSI standard for digitaltrunked radio recognized throughout Europe and is also referred to as Tetra-25. It is a further development of the GSM standard for professional mobile radio purposes.

The TETRA network is particularly suitable for authorities and organizations with security tasks, hence the designations digital public authority radio and BOS radio, but also for all companies for security, transport, production and energy supply. 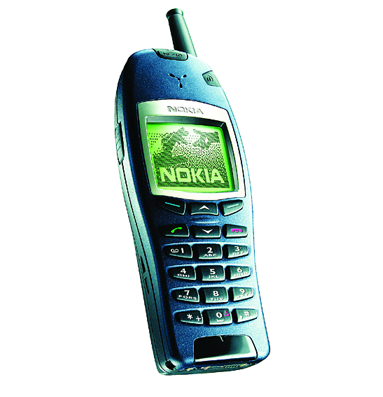 Tetra has a high transmission quality and good frequency economy. The Tetra frequencies are 380 MHz to 400 MHz, 410 MHz to 430 MHz, 450 MHz to 470 MHz, 870 MHz and 920 MHz. In addition to voice transmission, there is data transmission, although this is relatively limited in Release 1. Only in Release 2, with Tetra Enhanced Data Service( TEDS), is data transmission supported at high data rates. For larger data volumes, the packet-oriented "Packet Data Optimized" is available. This makes optimum use of the capacity of the radio channel.

Tetra as a universal system platform 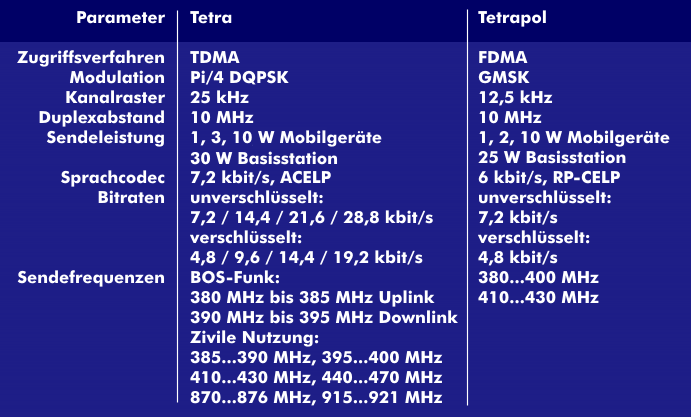 Specifications of Tetra and Tetrapol

The trunked radio standard is suitable as a universal system platform for a wide range of Tetra services: Paging, trunked radio, telephony, telemetry and data transmission. Tetra uses a special version of Differential Quarternary PhaseShift Keying( Pi/4- DQPSK) as the modulation method and the TDMA method with time division multiplexing as the access method, which operates with four independent communication channels per carrier frequency. The distance between the individual carrier frequencies is 25 kHz. This results in 200 carrier frequencies with a bandwidth of 5 MHz. The gross transmission rate is always 36 kbit/s per carrier frequency, or 9 kbit/s per channel. In addition to the data to be transmitted, additional control signals as well as codes for securing the radio link are transmitted. The useful bit rate per communication channel is 7.2 kbit/s. Speech is encoded in a special speech codec that uses Algebraic Code Excited Linear Prediction( ACELP). The codec output provides 4.8 kbit/s, which is transmitted at 7.2 kbit/s in a time slot including the backup information. 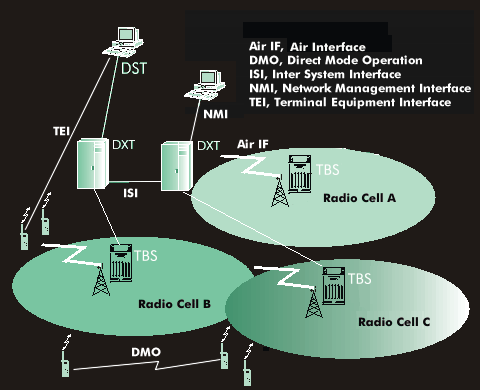 The distance between transmit and receive frequency is 10 MHz. The Tetra standard defines the Tetra address and the interfaces: The radio interface between the mobile radios and the Tetra Base Station (TBS), the Terminal Equipment Identifier( TEI) between the mobile radio and peripheral ancillary equipment such as personal computers, the Inter System Interface( ISI) for interoperability between different Tetra networks and the Network Management Interface( NMI) through which the Tetra network can be configured and managed and through which the connection to the public communications networks is made.