The Telnet protocol belongs to the ARPA services and performs the virtual terminal( VT) function. It allows remote access from one's own computer to other computer systems located in the network. Remote access can be used to emulate a session on the remote computer and work interactively with the application programs.

Since the application and display environments of the receiving stations are different, the Telnet protocol negotiates the different parameters and transmission modes of the virtual receiving station. This makes Telnet independent of the particular computer environment. Since Telnet is vendor-neutral, the operating environments mentioned include a wide variety of operating systems as well as the different characteristics of the available terminal devices, such as terminals or printers. 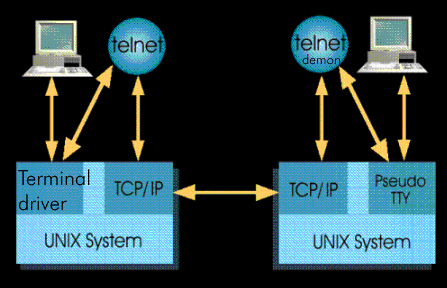 Telnet is based on TCP/ IP, supports the functions of layers 5 to 7 and enables bidirectional communication to connect data terminals with corresponding processes. The target system is generally referred to as Telnet server, the own local system as Telnet client. The connection is only possible between Telnet client and Telnet server. To the client, the Telnet server appears like a locally connected terminal. Telnet is used whenever there are one or more applications on another computer system that are not available locally and that you want to access temporarily.