The system bus is the central bus system of computers. It is located on the motherboard, has a central clock and connects the central processor with the memory units and the input/output (I/O) system. The system bus consists of parallel lines that form the data bus, the address bus, and the control bus. The bit width of the individual buses and their transmission speed are determined by the CPU concept.

The bit width of the individual buses is determined by the processor architecture, which results from the number of transmitted bits per memory access. These can be 4, 8, 16, 24, 32 and 64 bits. The same applies to the input/output systems. The bus system responsible for the data transfer of the memory contents is the data bus. The address bus transfers the address determined by the processor to the memories and the input/output systems. The third part of the system bus is the control bus. It transfers the control signals required to control the data transfer. 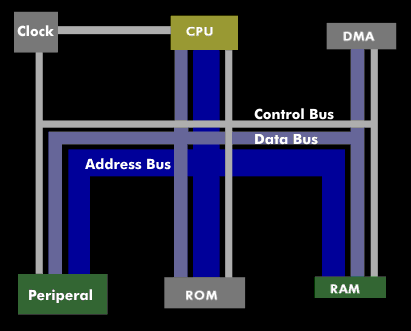 Basic concept of the system bus

The connection functions of the known PC buses such as the PCI bus, AT bus, local bus, SBus, NuBus, VLB bus, MCA bus and the VME bus, can therefore no longer be compared with the functions of a classic system bus.

The memory components are connected to the system bus via the memory bus. Dominating storage buses are Advanced Technology Attachment( ATA), the USB interface, FireWire and SCSI.