Surveillance cameras are cameras for monitoring public streets, squares, halls and sensitive facilities such as ATMs in banks, but also for monitoring private properties, buildings and facilities, and can be integrated into alarm systems.

Surveillance cameras can be used in video surveillance of buildings, for traffic monitoring, traffic control and people control, and are intended to protect public and private property, prevent damage to it, prevent crime and help solve crimes. They can be used to monitor objects and identify criminals where possible. Images and video sequences captured by surveillance cameras are stored and analyzed electronically and are available to other departments through security agency networks. Surveillance cameras are fixed, motorized video cameras that can pan, tilt and zoom, - Pan Tilt Zoom( PTZ), to capture faces of individuals in a group of people. 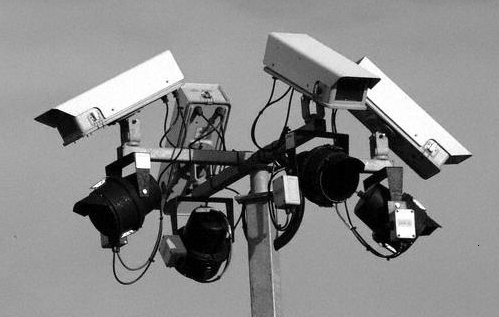 Surveillance cameras in CCTV in a public place.

In terms of connectivity, surveillance cameras can be wired or wirelessly connected via radio links or WLANs. The protocol-wise can be done via the IP protocol and the Internet. IP cameras are available for this purpose. So that images can also be captured at night, night vision cameras or infrared cameras are also used. The latter operate in the near-infrared range and illuminate the detection area of the IR camera with infrared light, which cannot be perceived by humans.

In public areas, the recordings from surveillance cameras are evaluated directly on monitor walls and control mechanisms, such as traffic light phases or police barriers, are used to try to remedy the interference.