A surface model is a 3D graphic in which the visible surfaces are represented as colored polygons that are connected to each other. The prerequisite for a surface model is an edge model or wireframe model in which each individual polygon has a specific color. Such a polygon is described by its vertices, which are connected by edges. This is illustrated by the example of a cube.

Due to the surface representation, a surface model shows only the visible surface of the body. Construction features, hidden edges and polygon edges are not visible, which makes the representation appear very realistic, but with the restriction that the color transitions between the colored surfaces remain visible. These color gradations can only be improved with shading techniques. 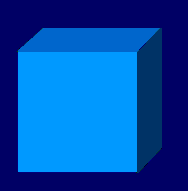 Surface model of a cube

The surface model, along with the wireframe model, is a tool for designing and constructing 3D objects. It is the basis for the solid model.

The surface model shows the raw design, but has the disadvantage of longer computing time compared to the wireframe model.