As indicated by the abbreviation SCADA, Supervisory Control and Data Acquisition, Scada is a computer system for collecting and analyzing real-time data. Scada systems are network control systems for monitoring, controlling and optimizing utilities and industrial plants.

Scada systems are used in water treatment or in energy generating and distributing plants, the smart grids, in telecommunication facilities or in chemical plants, in plants for steel production or car production. Scada systems do not so much control as monitor. They collect information, such as about a leak in a pipeline, transmit this information to the monitoring center, inform the relevant station about the fault situation and determine how critical the fault situation is for safety and operation. The fault situation is presented in a logical context.

Scada systems can have a relatively simple architecture if, for example, they only monitor environmental conditions, but they can also have an extremely complex structure if they monitor an entire nuclear facility. The size of a Scada system can range from a few thousand I/O channels to tens of thousands or even hundreds of thousands of I/O channels. 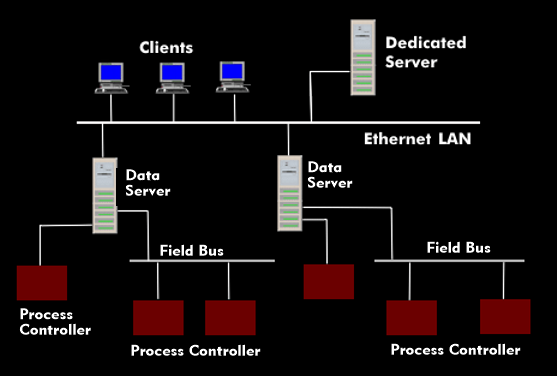 Scada architecture with Ethernet and fieldbuses

In terms of architecture, Scada has two distinct levels: the client level, where human-machine interaction takes place, and the data server level, where monitoring takes place. The data servers communicate with the field devices via process controllers. The process controllers are connected to the data servers via fieldbuses, such as Profibus. These in turn are connected to each other and to the clients via Ethernet. Communication between Scada systems takes place using the Sinaut protocol.