Super Barrier Rectifiers(SBR) are diodes characterized by extremely low forward voltage and power diss ipation. They are used in rectifiers and, unlike Schottky diodes and diodes with pn junctions, can tolerate voltages of several hundred volts with comparable forward losses and extremely low leakage currents. 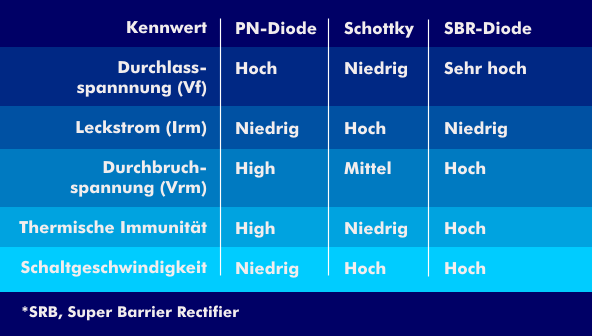 In terms of structure, SBR diodes, which are produced using modern semiconductor technologies, consist of an array of many individual semiconductor cells whose gates are interconnected via gate channels. The forward direction is doped so that electrons can move relatively freely. In the reverse direction, depletion zones form to prevent current flow.

SBR diodes are increasingly used in light-emitting d iodes(LEDs) in lighting technology, where they help to save energy because of their ultra-low forward voltages.