With the Super AudioCompact Disc (SACD), Sony and Philips have developed another audio file format that has a high sound quality and that works without data reduction. The high sound quality is achieved through the Direct Stream Digital( DSD) recording format.

The SACD is available in three versions: as a single- layer compact disc ( CD) consisting of a single HD(high density) layer with a storage capacity of 4.7 gigabytes( GB), as a dual-layer compact disc consisting of two HD layers and a storage capacity of 8.5 GB, and as a hybrid CD consisting of a CD layer compatible with the audio CD and an HD layer. The CD layer of the hybrid CD can be played as an audio CD in normal CD players. A special SACD player is required to play the HD layer. 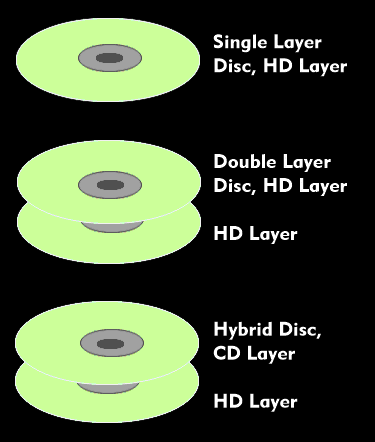 Variants of the SACD

The HD layer uses a special digitization technology, Direct Stream Digital (DSD), which has a sampling rate of 2.8224 MHz compared to the known audio methods with pulse code modulation( PCM), which results from the 64-fold multiplication of the sampling rate of 44.1 kHz. The high sampling rate expresses itself in a larger frequency range and thus in a better audio quality. Stereophony and multichannel audio can be stored on the HD layer, and later also texts, graphics, photos and videos.