The Spanning Tree Protocol(STP) is a redundancy method for loop suppression and thus for path optimization in networks. In this procedure, physically redundant network structures are determined and mapped in a cycle-free structure. This measure reduces the active connection paths of an arbitrarily meshed network structure and leads it into a tree topology, hence the name spanning tree.

Only when the preferred connection path is broken, the network is reorganized and the optional connection routes are activated. To check the connection routes, the switches or bridges communicate regularly with configuration data packets, the Bridge Protocol Data Units( BPDU). If a link fails, the BPDU data packets no longer arrive and the SPA protocol ensures reorganization. 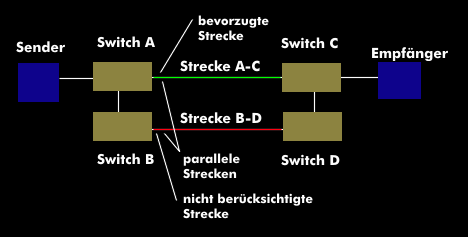 The Spanning Tree protocol was developed by Digital Equipment( DEC) and later adopted in modified form by IEEE 802.1d. The Spanning Tree Algorithm( STA) is implemented in corresponding bridge types, where each bridge calculates the path towards the root of the tree topology within certain optimality criteria. Distances, capacities, costs or traffic loads can be used as calculation parameters.

Since the conventional spanning tree method requires a long convergence time of approx. 30 several seconds for the reconfiguration of the connections, the IEEE working group 802.1 has specified several spanning tree methods, such as the Rapid Spanning Tree Protocol( RSTP) with reduced response time and, as a further development, the Multiple Spanning Tree Protocol( MSTP) with which the reconfiguration times are reduced even further.