A sound card is a plug-in card for personal computers. It is used to digitize analog audio, process and store the digital audio and convert it back to analog audio, and output it as a sound signal.

Functionally, it is an expansion card that digitizes analog voice and audio signals in an A/D converter, processes and compresses the digitized data, and stores it in an audio file format in RAM. The audio quality is determined by the quantization of the A/D converter and by the sampling rate. Digitization with 16 bits results in a resolution of 65,536 sound levels, and a sampling rate of 44.1 kHz results in 88.2 kB/s of data. 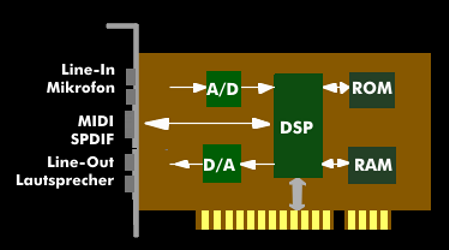 Structure of a sound card

This audio data is processed in a DigitalSignal Processor( DSP) or an Audio Processing Unit( APU) and reduced by means of audio compression. The compressed data is temporarily stored in an audio file format, for example in MP3 or as a Waveform Audio File(WAV) on the sound card's RAM before being loaded onto the hard disk. 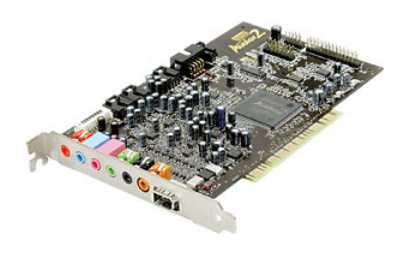 Playback takes place in the opposite direction. The stored audio data is decompressed from the hard disk or an optical storage medium in the digital signal processor and converted into the audible audio data in an audio synthesis, which is then converted back into an analog audio signal in the D/A converter.

The interface of sound cards to the motherboard is formed by the PCI bus or the PCI Express. Sound cards in their own housing can also be connected via the USB interface.

Inputs and outputs of sound cards

Audio cards have several analog inputs and outputs for jack plugs and a microphone input( Mic- In) for dynamic microphones. Some sound cards also have an integrated microphone preamplifier. In addition, line-in as an optional input for recordings, and line-out as a headphone or speaker output for active speakers. Furthermore, a speaker output for connecting a headset and a Musical Instrument Digital Interface( MIDI) via which tones, instruments and sounds can be described. The MIDI interface consists of a MIDI data input (MIDI- IN) via which the MIDI data is transmitted, a MIDI-OUT via which MIDI data is forwarded and a MIDI-THRU with which MIDI data is looped through from the MIDI-IN to other MIDI instruments.