The SMGW communication module interconnects three networks: the Home Area Network( HAN), the Local Metrological Network( LMN) and the Wide Area Network(WAN). In the aforementioned constellation, the home network forms the interface to the end user. The home network (HAN) contains the home appliances and the energy-generating equipment and systems. Some home appliances, such as washing machines, dryers or dishwashers, can be timed to take advantage of cheaper electricity rates. These appliances belong to the Controllable Local Systems( CLS). Energy-generating facilities are classified as Distributed Energy Resources( DER). They include photovoltaic plants, biogas plants, and combined heat and power machines. 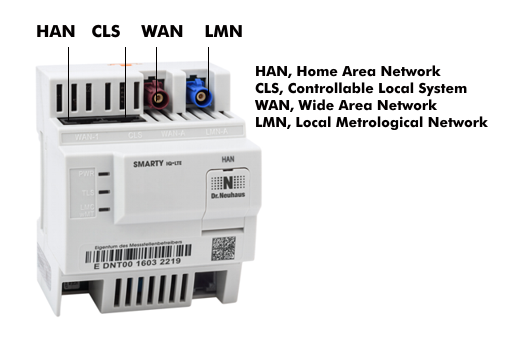 The Local Metrological Network (LMN) is the interface to smart meters. It is a local metrological network with which the consumption and feed-in values for electricity, water, gas and heat are measured. The measured values are measured at regular intervals and recorded, processed and stored in the SMGW gateway or MUC controller. To ensure transmission security, the data is encrypted in a security module in the SMGW. In addition, the SMGW gateway provides the user interface for the consumers and the service personnel. Consumption data, configurations and service information can be accessed via this.

The wide area network is usually an IP network through which the SMGW gateway transmits its data to the servers of the power grid operator or to energy suppliers. Communication can also take place with narrowband powerline via the smart grid, or via radio and mobile radio.