The Institute of Electrical and Electronics Engineers(IEEE) has described a smart city as one that brings together technologies, public administrations and society to enable smart economies, smart mobility, smart environments with smart people.

Smart city is about providinginformation for the benefit of residents and urban infrastructure. Through smart cities, the economy and the administration of cities should become more efficient; innovation, creativity and entrepreneurship should be stimulated, promoted and implemented. This applies to all urban tasks, starting with transport infrastructure, where intelligent traffic management and open parking systems( OPS) are designed to improve traffic flow while reducing harmful emissions and pollution by monitoring and controlling the environment. Intelligent and economical street lighting systems will provide cost savings, and video surveillance will enhance security and deter burglars and violent criminals. Taking into account criminal hotspots and optimized police deployment, crime rates can be reduced. 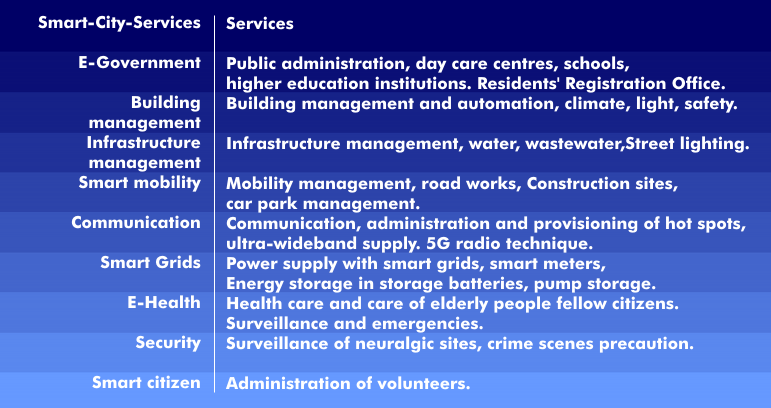 A smart city relies on a high degree of networking and data exchange between different transportation and logistics systems, energy suppliers and urban service providers. The prerequisites for the networking of a smart city have been created by the Internet of Things( IoT). Sensors everywhere are collecting data. Whether about pollutants, emissions, temperatures, brightness values or the number of cars and trucks, the aim is to use the flood of data through appropriate algorithms and derive control mechanisms from it.

Smart cities are defined by how they solve problems through innovation, a modern communications infrastructure and a comprehensive range of services. The City-as-a-Service paradigm stands for the latter.