Single Pair Ethernet( SPE) is a particularly simple and robust cabling used in automotive technology, industrial Ethernet and industrial automation. SPE technology uses a single pair of wires. The SPE method, which is based on the Ethernet standards according to IEEE 802.3, can transmit not only the data but also the supply voltage for IP components as well as for sensors and actuators via the single-pair cable, using Power over Data Lines( PoDL).

According to the previous Ethernet development, Fast Ethernet with 100 Mbit/s requires two twisted pairs of wires for the transmission, Gigabit Ethernet even requires four pairs of wires considering the different categories. With Single Pair Ethernet (SPE), data streams can be transmitted over only one twisted pair of wires. Single Pair Ethernet offers a continuous TCP/IP communication and is therefore an interesting alternative in automation and automotive technology to the field buses and communication systems such as the LIN bus, CAN bus, FlexRay, Profibus, etc.. The control signals, the communication between the components and the safety relevant functions are realized via Ethernet. 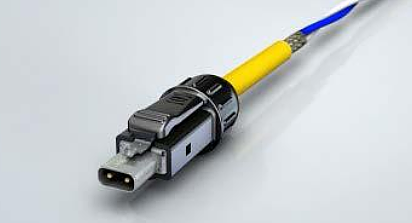 Single-pair Ethernet is based on the physical layer and uses newly developed SPE components, couplers, connectors, SPE cabling and cables. The latter consists of a pair of wires via which the components are supplied with power over data lines (PoDL).

There are various proposals from different companies for the SPE connector. They are all standardized under the IEC standardIEC 63171. The SPE concept is dealt with by many standardization committees that take care of the components, the cabling systems and the application. At IEEE alone, it is the IEEE 802.3cg working group that deals with the 10 Mbit/s variant 10Base- T1, the 802.3bw working group deals with 100 Mbit/s for 100Base-T1, and 802.3bp deals with 1000Base-T1 at 1 Gbit/s. These three IEEE working groups cover data rates of 10 Mbit/s, 100 Mbit/s and 1 Gbit/s. In addition, the MultiGigBase-T1 working group is to make preparations for the standardization of single-pair Ethernet with data rates of 2.5 Gbit/s, 5 Gbit/s and 10 Gbit/s.