Short-range radars, like long-range radars, belong to the Advanced Driver Assistance Systems( ADAS). They operate according to the time-of-flight method and detect stationary objects in the close range. The transmission frequencies are in the 24 GHzfrequency range. Long-range radar (LRR) is an FMCW radar, while short-range radar (SRR) is a CW radar. It has a much wider beam angle, which is +/-60° in azimuth and about +/-10° in vertical radiation pattern. The ability to detect objects that are at an angle to the direction of travel depends on the directional characteristics of the radar antennas.

The 24 GHz frequency range has been extensively studied by the EU Commission for use in SRR radar because it is the license-free ISM band that various other services also use. For the automotive sector, use was restricted to the effect that the proportion of motor vehicles with SRR radar in a national market must not exceed 7%. 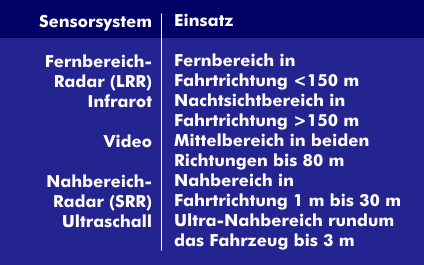 Applications of the different sensor systems in cars

Short-range radar is a CW ( continuous wave) radar whose radar frequency of 24 GHz can be transmitted continuously without modulation. This is referred to as continuous wave radar. With short-range radar, the measurable distance range is between 50 cm and about 50 m. Thus, short-range radar can be used to warn of obstacles and for collision warnings, as well as for stop-and-go driving. In addition, it can be used as a parking assistant and to indicate lane changes. Many of the applications mentioned above also involve determining the angle at which the object is located from the car. For this reason, the AOA method, Angle of Arrival (AOA), is used to determine the angle.