The Short Interframe Space (SIFS) is a time interval that is used in the CSMA/ CA procedure and in 802.11. SIFS is used to insert a safety distance between two transmission blocks so that they do not influence each other.

SIFS has the highest priority; a station with SIFS may transmit before all other stations. Typical SIFS intervals are 10 µs in the 2.4 GHz frequency band and 16 µs in the 5 GHz band. 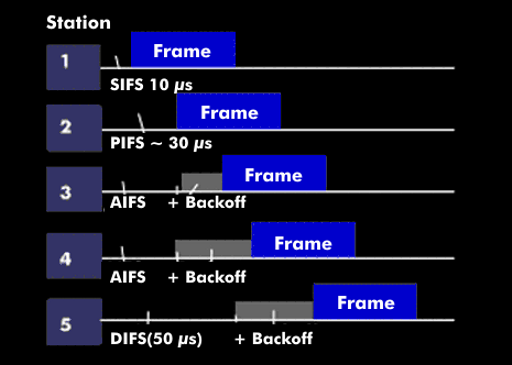 SIFS is used, for example, before acknowledging a received data frame with the acknowledgement flag( ACK), as well as before sending the ready to transmit( CTS) as confirmation of a request to transmit( RTS) or before transmitting the following fragments. To improve the data rate, the WLAN standard802.11n also offers Reduced Interframe Space( RIFS), which is only 2 µs. If no station has the SIFS authorization, the station with the slightly longer PIFS starts, followed by the one with the Arbitrated Interframe Space( AIFS).